skip to main | skip to sidebar

How to Make Burlap Frames - Without any Wood 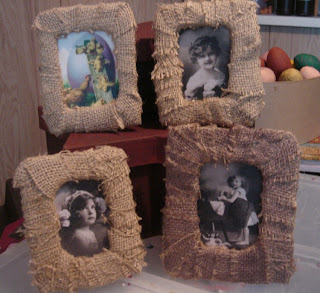 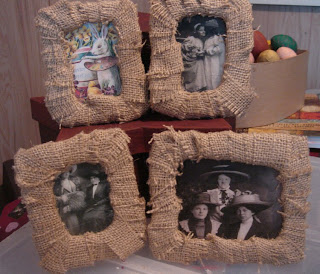 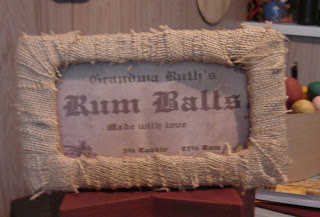 I'm in a wood challenged household, i.e., I don't have access to craft supply stores, and I tend to be very frugal. I love the look of burlap and old fashioned prim decor, so I thought of making some burlap frames. Ah...but no wood. No problem because as some of you who have seen my other tutorials know, I sure like to use up cardboard and packaging that food comes in. 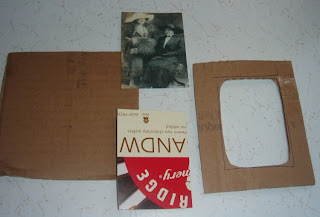 For each picture, I cut out two pieces of out of heavy cardboard - one for the frame and one for the backing. Then I cut out "cardstock" from food packaging. This is what I glued the old fashioned pictures onto.

I wrapped strips of burlap around my cardboard frames, using mod podge to glue where I began and ended each strip. Then I painted the back of heavy cardboard, which acts as the back of the frame. (As you can see, I later snipped off the corners to make it easier to adhere to the burlap). 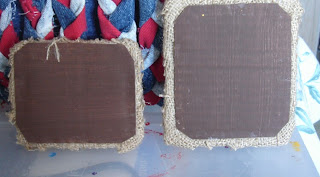 I also glued my old fashioned pictures onto their respective cardstock that I created for them. After everything was dried, I glued my cardstock (with picture) on to the back of the heavy cardboard frame I created. Once that was dry, I mod podged the frame back to my burlap frame. To make sure it adhered to each other while they dried, I clamped a bunch of clothespins all over. 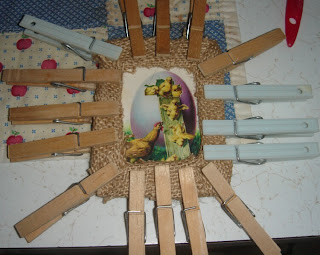 As you can see in the very first picture, one frame (lower right) is darker than the others. I used a very watered down black paint and gave it a "wash" over the frame - making it look slightly older. When I have time, I'd love to try other watered down colors to see how they would look with burlap.

Additionally, since burlap is interesting on its own, you can leave as is, or add all kinds of embellishments to it, such as ribbons, raffia, flowers, buttons, etc. My next burlap frame is going to have some of my ragged fabric flowers glued to them.

Posted by Screaming Sardine at 7:39 AM

****PLEASE DON'T SIGN UP TO BE A FOLLOWER HERE. I'VE MOVED TO SCREAMING SARDINE****.